One-hundred fifty-six students were conferred diplomas from St. Mary’s Dominican High School during a pre-recorded video of the Baccalaureate Mass and Commencement for the Class of 2020. The video went live at 10 a.m. on Saturday, May 16, the date that was scheduled for an on-campus commencement. It received more than 1,400 views.

One of the highest academic honors a high school student can receive is National Merit recognition for outstanding academic ability as determined by the student’s scores on the PSAT administered in October of her junior year. The National Merit Scholarship Corporation recognized Celeste Patron among the 2020 National Merit Finalists.

Although there were no spring testing programs this year, as of May 5 there were 27 seniors that qualified for advanced placement college credit through Advanced Placement (AP) exams, for a total of 127 credit hours. Many of these students were placed into honors programs because of their high scores on the placement tests. Additional college credits will be awarded in July based on AP exams during the first two weeks of May. Twenty students earned another 117 hours of math credit through math dual enrollment with Louisiana State University. The Class of 2020 completed more than 28,845 hours of community service.

In the Fine Arts of Music, Drama, and Visual Arts, the graduates are among the most talented in the state. Athletically, members of this class participated in 8 out of 10 sports offered at Dominican, breaking individual records. Additionally, these students captured several titles, including, Louisiana High School Athletic Association All-Academic Teams and All-District Team Members. This year, Dominican also captured District and State Runner-up titles. Senior Olivia Peyton signed a volleyball scholarship with Spring Hill College.

Salutatorian Elise Dorothy Bourg received the Salutatory Award for achieving the second highest cumulative grade point average in her program of studies. Elise is the daughter of Dr. Florence Bourg and Michael Bourg of Harahan. She plans to major in theatre management at the University of Oklahoma Norman Campus that offered her the Award of Excellence scholarship. An AP Scholar with Honor, she was a Student Preacher, Eucharistic Minister, Choir president, Drama Club secretary, and member of Liturgical Music, Mu Alpha Theta, National Honor Society, and Tri-M Music Honor Society. 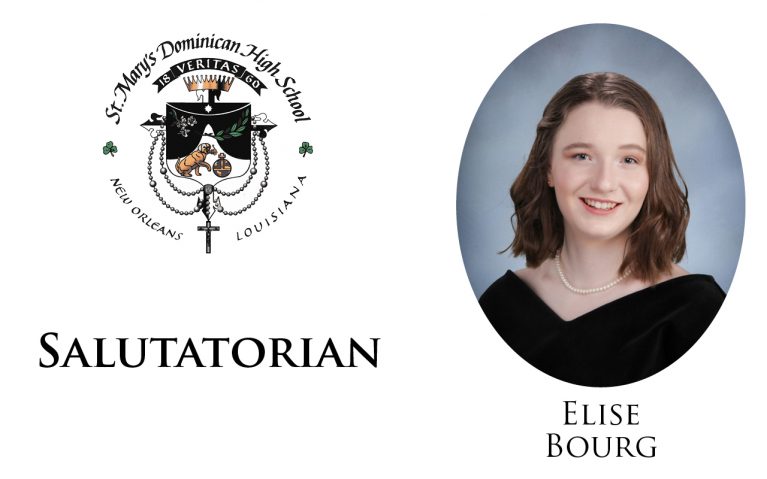 Valedictorians were Lyndsey Paige Jones and Tessa Louise Paul. They received the Valedictory Award, presented to the honor graduates who have achieved the highest cumulative grade point average in their program of studies. 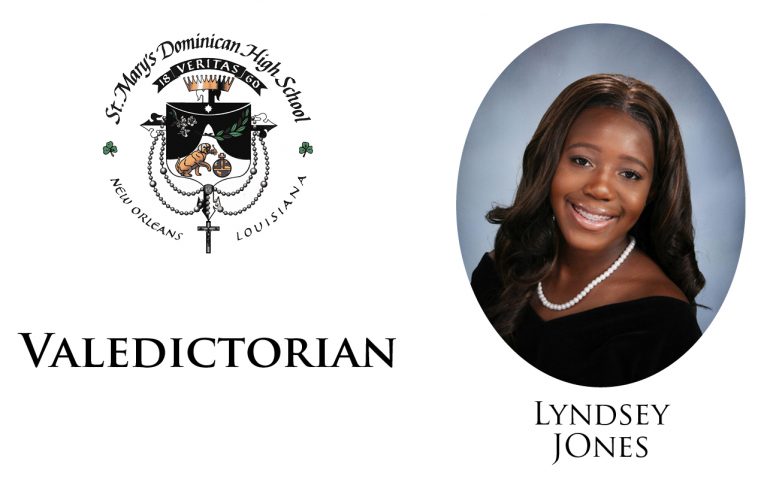 Tessa Louise Paul is the daughter of Sandee Paul and James Paul of Kenner. An AP Scholar with Honor, she plans to major in kinesiology pre-med at the University of Louisiana at Lafayette. The university awarded her the Live Oak Scholarship. At Dominican, she was a member of the National Honor Society, National English Honor Society, and Biotechnology Club. She also ran Cross Country and Track and Field. 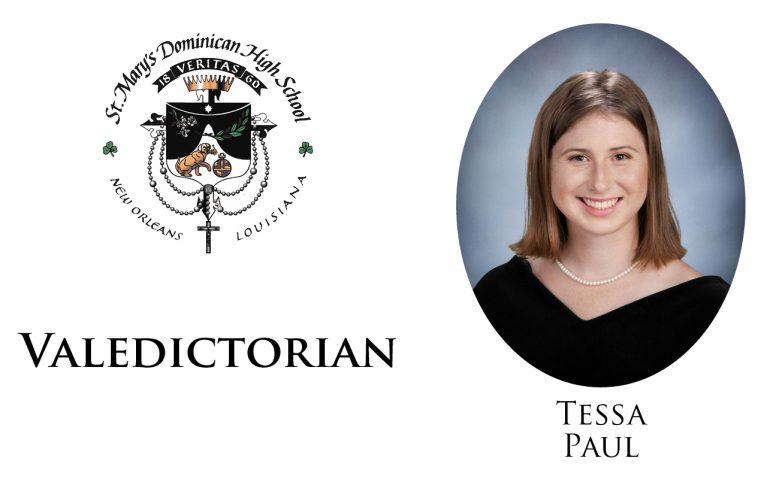 The Mother Mary Magdalen O’Farrell, O.P. Service Award was presented to Elise Bourg. The award recognizes a student’s outstanding, dedicated service to St. Mary’s Dominican High School. Dominican life and growth are mirrored in her reflection of the school’s philosophy by belief in God and respect for the dignity of all human beings. 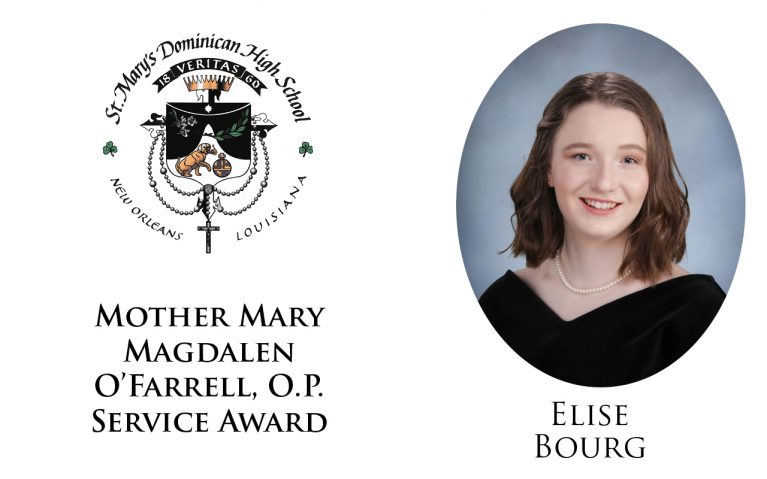 The Sr. Mary Ambrose Reggio, O.P. Alumnae Award was presented to Mary Alexander, selected by her classmates for representing Dominican Spirit. Dominican’s motto: “To Praise, to Bless, to Preach” is an integral part of the honorees’ lives, as is their commitment to truth, VERITAS. 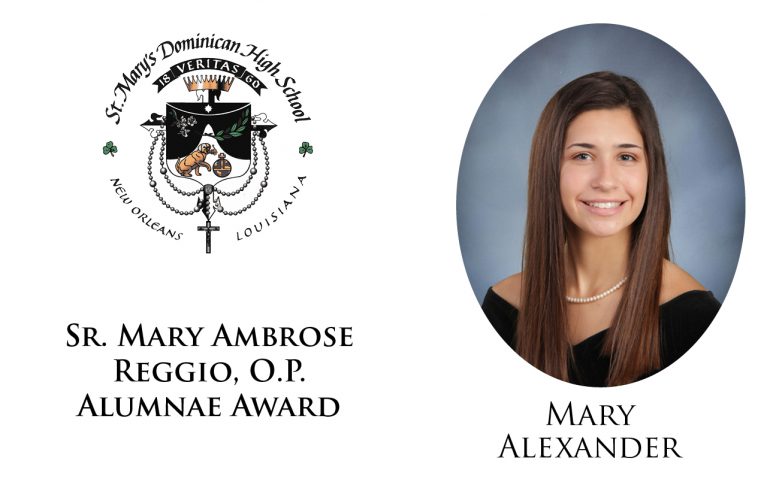 The Ancient Order of Hibernians Inaugural Award was presented to Elise Bourg for exemplifying the order’s motto of friendship, unity, and Christian charity. America’s oldest Irish Catholic Fraternal Organization started in May 1836, the order’s members greeted the seven Dominican sisters from St. Mary’s Convent in Cabra, Ireland, when they arrived in New Orleans on November 5, 1860. 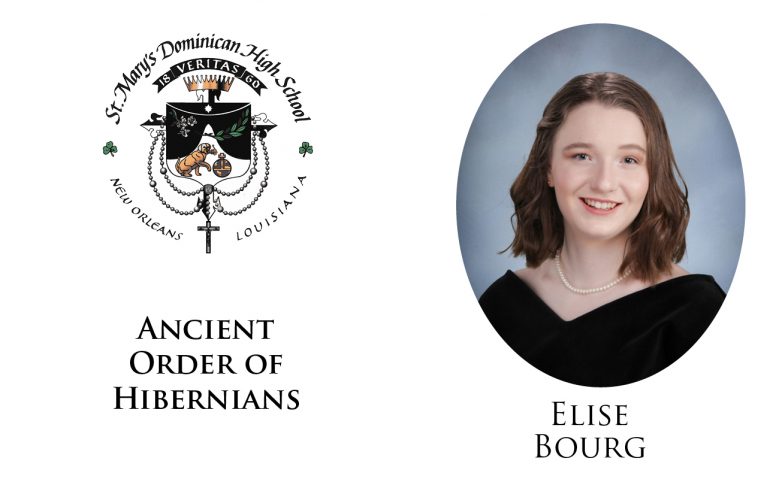 Graduates Mary Alexander, Madison Bertucci, Alyssa Helwig, and Gloria Thomas were selected by leadership, administration, and faculty to receive The Veritas Award, the most prestigious award presented to a St. Mary’s Dominican High School graduating senior. The recipient of this award demonstrates exemplary understanding of the Dominican Charism. Following the example of St. Dominic de Guzman, founder of the Dominican Order, the Veritas Award recipient faithfully strives to seek Truth through prayer, study, community, and service. She preaches the Truth of the Gospel through the example of her life and calls forth the best in others. 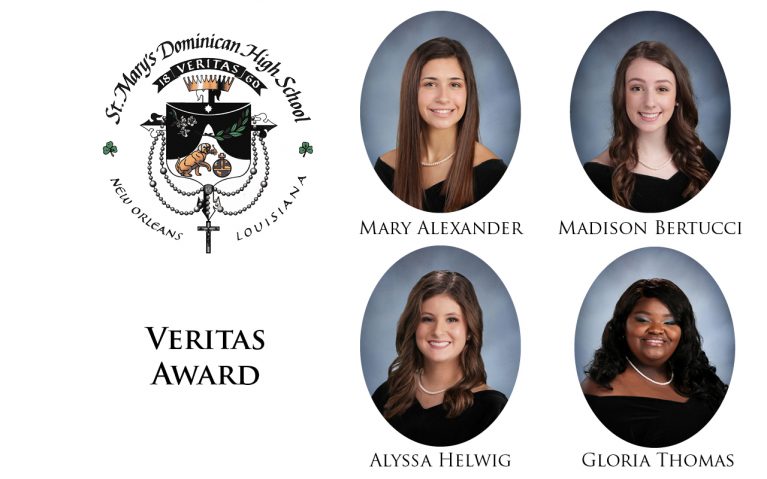