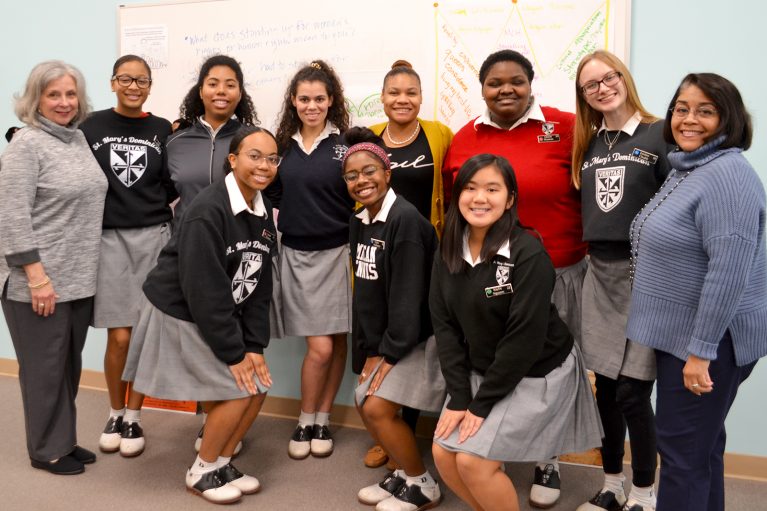 As part of observance of Black History Month, guest speaker Anastacia Scott, Ph.D., Leventhal Education Specialist at the Amistad Research Center, presented, “Looking Ahead to Our Future, While Celebrating Our Past.” The presentation highlighted prominent women from the early 20th century through the Civil Rights era in New Orleans and students participated in a didactive activity and discussions. 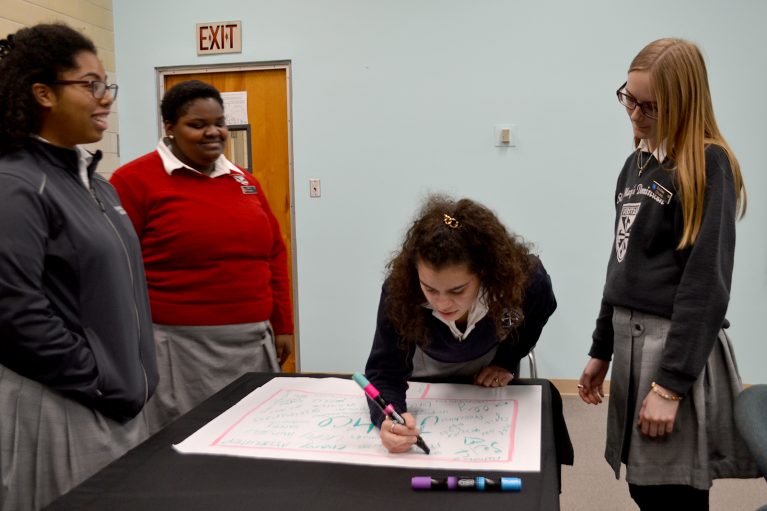 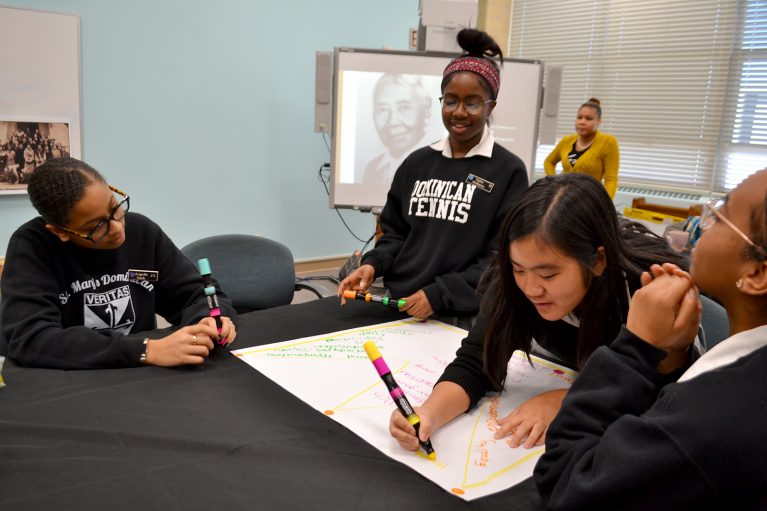 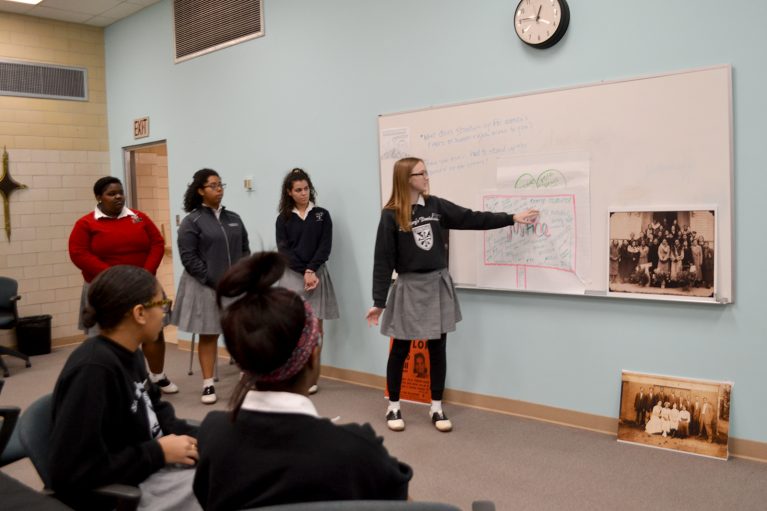 The Amistad Research Center, locate on Tulane University’s campus, is a special collections library and archive whose collections focus on African American life, history, and fine art. The center also collects in the areas of Civil Rights history. Dr. Scott, who has a doctorate in Africology, with specializations in Museum Studies and Nonprofit Management, is responsible for researching the collection to create K-12 curriculum on African American History. She developed the Amistad On the GO! (AOTG) educational toolkit, launched in early 2018.  It contains first-person narratives and selections from primary resources, a curriculum guide, interactive worksheets, visuals, and access to digital resources for educator use on the topics of Slavery and Abolition, the Reconstruction Era, and Civil Rights Movement. Within each curriculum guide, there are 6-7 lessons that cover the topic’s major historical occurrences.

The women highlighted in Dr. Scott’s talk were Jessie Covington Dent, Rosa F. Keller,  Dorothy Mae Taylor, and Fannie Williams. Their contributions to the community extend beyond their lifetimes. 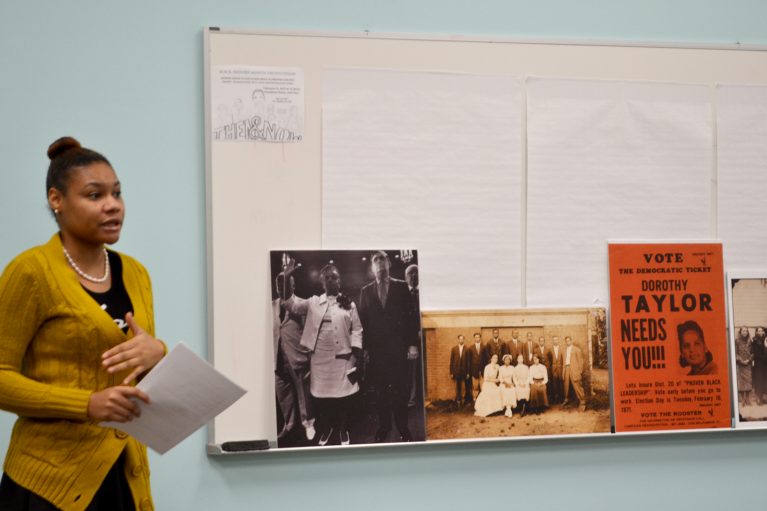 Jessie Covington Dent (1904-2001) pianist and educator born in Houston, Texas, started piano lessons at age four. She was accepted at age 14 to Oberlin College, but did not enter the Oberlin Conservatory of  Music until two years later where she majored in piano and minored in violin. Following graduation, she won four back-to-back fellowships from the Juilliard Foundation (Julliard Graduate School). She received a grant from the Rosenwald Fund and continued graduate studies at Oberlin, earning a master’s degree in piano.  She was one of the most sought-after concert pianists on black college campuses in the 1920s and 1930s. In 1932, she and her husband, Albert Walter Dent, moved to New Orleans when he became superintendent of Flint-Goodridge Hospital.  She became of charter member of the hospital’s Women’s Auxiliary. In 1940, her husband was named president of Dillard University. In her philanthropic work, Dent inspired the start of Ebony Fashion Fair which raised nearly $50 million in scholarships to students. A board member of the New Orleans Philharmonic Symphony Orchestra, she was instrumental in integrating orchestra concerts in the city. She supported the effort of minority classical musicians to increase their numbers in teaching positions and in major symphony orchestras.

Rosa Freeman Keller (1911-1998), daughter of a Coca-Cola tycoon, did not follow the expected path of a socialite. She attended Newcomb College and Hollins College in Virginia. Around World War II, she became aware of injustices in the world and worked throughout her life to address these, particularly among African American residents of the city.  In 1945, working with the Young Women’s Christian Organization (YWCA), she helped raise funds to build the YWCA’s Claiborne Avenue branch. A year later, she was among a group of women who campaigned for New Orleans mayoral candidate Chep Morrison who later appointed her the first female member of the New Orleans Public Library board of directors. Keller later became the first woman to lead the board. The board voted to integrate all libraries in the city. One of the founders of the Independent Women’s Organization, she served on the board from 1954 to 1967; and the Committee of 21, dedicated to getting more women elected in office.  She and her husband, Charles Keller Jr., invested in construction of Pontchartrain Park, one of the country’s first suburban-style subdivisions developed by and for middle-class African Americans after World War II. Her efforts toward school integration in New Orleans included helping found Save our Schools (SOS) which petitioned the Orleans Parish School Board to keep schools open after integration. She received honorary degrees from Dillard University, Loyola University School of Law, and Tulane University. In 1995, Mayor Marc Morial presented her with the city’s Medal of Honor.

Dorothy Mae DeLavallade Taylor (1928-2000) was an educator and also served in public office. After graduation from Southern University, she became a Head Start teacher at the William J. Guste Elementary School. She was a civil rights activist in the 1950s and 1960s. She successfully petitioned the New Orleans Public Schools and the New Orleans Recreation Department to provide equal resources to African Americans. Eventually, schools, playgrounds, and swimming pools were desegregated.  Taylor was the first African-American woman to be elected to and serve in the Louisiana House of Representatives, winning a special election in 1971 to succeed Ernest Nathan Moral in the state House.  In 1980, she became director of the Central City Neighborhood Health Clinic, operated by Total Community Action Agency in New Orleans. In 1984, Governor Edwin Edwards appointed her to head the state Department of Urban and Community Affairs, becoming the first African-American woman to hold a cabinet position. In 1986, she was elected to one of two at-large positions on the New Orleans City Council. She was chosen as Council President in 1987.  During her tenure, her efforts to desegregate the Mardi Gras organizations led to a final ordinance that required krewe captains to sign an affidavit certifying that they were not discriminating as a condition for obtaining a parade permit.

Fannie C. Williams (1882-1980), born in Biloxi, Mississippi, was a pioneer in the field of African American education in the South.  She moved to New Orleans where she graduated in 1904  from Straight College (today Dillard University). In 1920 she earned a Bachelor of Arts and a Bachelor of Pedagogy from Michigan State College.  Her first job after college was teaching in Gulfport and Pass Christian, Mississippi from 1904 to 1908. She taught at Fisk Elementary in Albion, Michigan from 1908 to 1917. She was the principal at Valena C. Jones Elementary and Normal Schools in New Orleans from 1921 to 1954.  She championed holistic development for children, including mental, physical, emotional, and spiritual growth. In 1929, she started a health program, that led to the creation of Child Health Day on May 1 of each school year. Known for her work in education and community development, she served as an organizer, charter member, and president for the Board of Management for the African American branch of the city’s YWCA; Orleans Neighborhood Center’s board of directors; Family Service Society; Girl Scouts; and American Red Cross. Williams participated in three White House Conferences during the administrations of US Presidents Herbert Hoover, Franklin Roosevelt, and Harry Truman. She served as president of the National Association of Teachers in Colored Schools and on the board of directors for Dillard University and Flint-Goodridge Hospital, and as an advisory member for the Department of Public Welfare. In 1977, she was recipient of awards from the American Teachers Associations and the National Teacher’s Association. Dillard University opened the Fannie C. Williams Hall in 1946 and 1950, honoring her work in education. In 1961, she received the university’s Distinguished Alumni Award.