In the early morning darkness of June 6, 1944, a group of U.S. paratroopers descended into a deadly firefight in the town square of Sainte-Mère-Église, France.  Simone Renaud watched as German forces turned their machine guns on the misdropped 82nd Airborne Division soldiers who gave their lives to begin the Allied invasion that 11 months later would liberate Europe.

Madame Renaud was the wife of Alexandre Renaud, the World War II mayor of Sainte-Mère-Église, the first town liberated on D-Day. In the days and weeks that followed, as the U.S. wounded and dead passed before her eyes, she made a simple vow that would last the rest of her life, and beyond. “Never forget.”

She would never forget the sacrifice of those soldiers. The weeks following D-Day, when the Western Allies launched the largest amphibious invasion in history, Renaud took it upon herself to care for the graves of an estimated 15,000 U.S. troops that were buried in three temporary cemeteries in and around the town.  Madame Renaud committed her lifetime to tending the graves and cemeteries until all the remains were moved to the National Cemetery in Normandy. Her commitment also was to correspond with their loved ones back home. Renaud has been lauded, “friend, family, and touchstone to those whose lives were forever changed by D-Day.”

After a photo of her decorating the grave of General Theodore Roosevelt Jr., a founder of the American Legion, was published in Life magazine, Renaud was inundated with mail from U.S. families, asking if she would also care for their loved ones’ graves. Called The Mother of Normandy, this remarkable woman’s devotion to a generation of heroes crossed an ocean and transcended all boundaries. For 44 years, she dedicated herself to this service, until her death in 1988.

Seventy-five years later, the life of Simone Renaud was presented by a group of young actors, visiting from France to students in US History, World History, and English classes at Dominican. The actors also traveled to New York for performances at schools. In the fall, they hope to have a return visit to New Orleans. To facilitate their performances at New Orleans area high schools, they were assisted by Jefferson Parish Council of Garden Clubs, Mary Hazen chaired the efforts, assisted by Dominican alumna Mary Ellen Miller (’60).

Miller said the actors’ goal was to reach as many high school students as possible in their short time here, with performances at Belle Chasse High School, Chalmette High School, and Dominican. There was also a special performance at the WWII Museum with Maurice Renaud, the youngest son of Simone and Mayor of Sainte-Mère-Église, Cathy Soren of Operation Democracy, and several local officials in attendance. 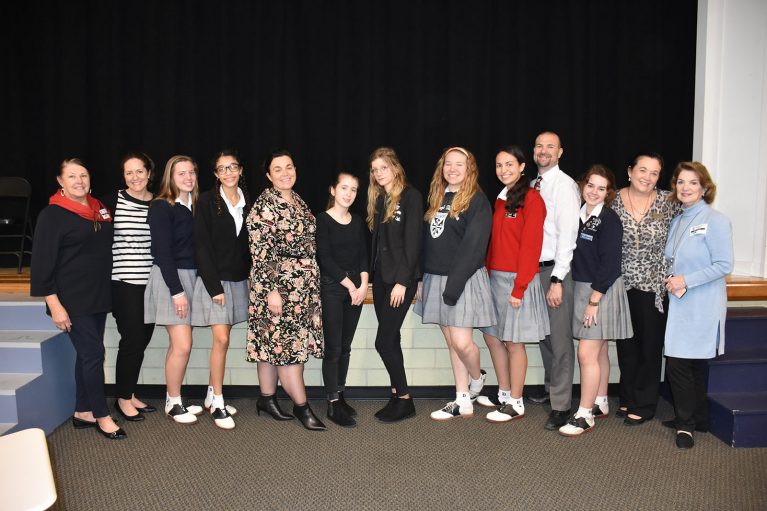 “Simone answered all the letters that were sent to Sainte-Mère-Église from families in the US, requesting if someone would tend to the grave of their loved one. Simone would locate the grave, plant a flower, and take a picture of the grave. She then wrote a personal letter to the family, including a small sample of the soil from the loved one’s grave. This started an amazing friendship between the people of Sainte-Mère-Église and the American families,” shared Miller.

In observance of the 75th anniversary of the D-Day Invasion, this June 6th, the Jefferson Parish Council of Garden Clubs will erect a National Garden Clubs Blue Star Memorial Marker on a monument in the center of the small town of Sainte-Mère-Église. Miller said it will “honor the soldiers who lost their lives that day and also the people of the town who gave them dignity in death by burying each individual, marking their grave, and corresponding with their families.”

Renaud’s legacy is the subject of the documentary film, “Mother of Normandy.” It was accepted and screened at the 2010 GI Film Festival in Washington.  A new book, “Mother of Normandy: The Story of Simone Renaud,” is a companion to the film. Book sales’ proceeds are applied to The American Legion’s Overseas Graves Decoration Trust Fund. The fund provides U.S. flags, free of charge, to place at the grave sites of U.S. war dead buried in foreign lands, under the American Battle Monuments Commission’s’ administration