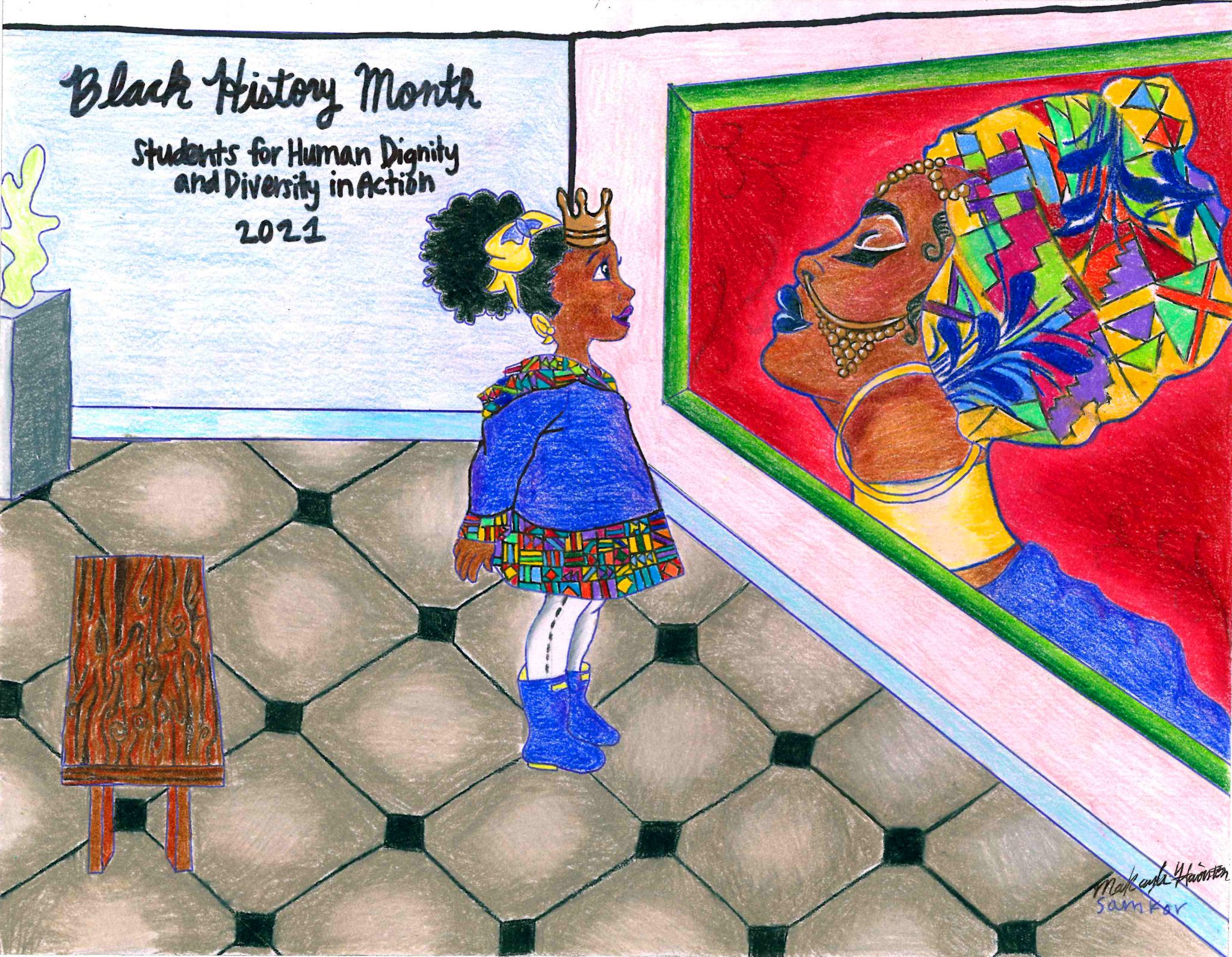 As part of Dominican’s observance of Black History Month, members of Students for Human Dignity & Diversity in Action shared reflections about some of the Black women and men who are celebrated for their contributions throughout history. Educator Anne Marie Becraft who became Sr. Mary Aloysius, Oblate Sisters of Providence – the first African American nun in the Catholic Church, 16-year-old writer and activist Marley Dias who launched #100BlackGirlsBooks drive to get diverse books into schools, John Lewis – minister, politician, and statesman, were among the women and men celebrated.

Since 1976, every U.S. president has officially designated the month of February as Black History Month, an annual celebration of achievements by African Americans and a time for recognizing their central role in U.S. history. Also known as African American History Month, it was the brainchild of noted historian Carter G. Woodson and other prominent African Americans. Other countries around the world, including Canada and the United Kingdom, also devote a month to celebrating Black history.

Here are some of the reflections by the student readers:

On March 7, 1965, nonviolent demonstrators were savagely attacked crossing the Edmund Pettus Bridge in an attempt to march to the state capital in Montgomery. It became known as Bloody Sunday. Rev. King called upon many of his allies among the ranks of Catholic religious leaders. “Put on your clericals,” he told them. One hundred twelve local Catholic Interracial Councils were mobilized.

Laypeople, nuns, and priests made the pilgrimage to Alabama in unprecedented numbers, adding a distinctive Catholic presence to the Selma protests. Delegations came from all regions including, New York, Chicago, and New Hampshire. Rev. King was delighted with this turnout from Catholic councils and colleges.

He confided to Father Ouellet a local priest and ally, “Isn’t it wonderful that we are getting all kinds of people coming down, and we’re even getting priests and sisters?” Father Ouellet said, “Well, it’s about time they got here.” But Rev. King disagreed: “Oh, Father, don’t say that. The important thing is that they are here.”

Rev. King knew that an individual’s willingness to contribute to and actively participate in a community’s struggle for justice and equality renders them allies, partners, and comrades of the cause, despite the fact that this person is not originally a part of the community.

The Students for Human Dignity and Diversity in Action ask you to join the struggle for justice and equality. Become an ally by using the privilege God blessed you with to help those in need.

John Lewis was a minister, politician, statesman who served for 33 years in the United States House of Representatives for Georgia’s 5th Congressional District. However, it is his life as a civil rights activist that will continue to live on in perpetuity.

Mr. Lewis listened to Rev. Dr. Martin Luther King’s sermons during his youth. Additionally, the Montgomery bus boycott led Mr. Lewis to act for change although he would not meet Rev. King until he was 18 years old. A year earlier Mr. Lewis left his home of Troy, Alabama to attend the American Baptist Theological Seminary in Nashville, Tennessee. This is where he learned about nonviolent protest and began to organize sit-ins at segregated lunch counters.

By 1963, Mr. Lewis became chairman of the Student Nonviolent Coordinating Committee. This is the same period of time in which he became one of the organizers for the March on Washington, becoming the youngest speaker at the event. While Rev. King was unable to attend the march from Selma to Montgomery, Mr. Lewis led the march with Hosea Williams.

After crossing the Edmund Pettus Bridge, the marchers were savagely attacked. Mr. Lewis was severely beaten and suffered a fractured skull. This became known as Bloody Sunday which sped up the passage of the 1965 Voting Rights Act.

In the words of John Lewis: “Freedom is not a state; it is an act. It is not some enchanted garden perched high on a distant plateau where we can finally sit down and rest. Freedom is the continuous action we all must take, and each generation must do its part to create an even more fair, more just society.”

In honor of John Lewis, the Students for Human Dignity and Diversity in Action asks each of you to do your part in continuing our work to create a more fair and more just Dominican community for us all.

Born to prominent free Blacks in 1805, Anne Marie Becraft was an educator who became one of the first African American nuns in the Catholic Church. Her formal education began at the age of four at the Potter School in Washington, DC. Due to race hostilities, Anne Marie was forced to leave the school around 1812. She then enrolled at New Georgetown, attending the school until 1820. It closed due to concerns about educating Blacks.

Next, Anne Marie became the proprietor of a day school in Georgetown in 1827. One of the First for Black females in the District, the school became known as the Georgetown Seminary. It operated as an academy for boarders and day students.

After being denied entrance into the white order of women religious, Anne Marie joined the Oblate Sisters of Providence in Baltimore in 1831. This was the first Roman Catholic religious institute for Catholic women of African descent. On September 8, 1832, she received the religious name, Sister Mary Aloysius, Oblate Sisters of Providence. After taking her vows, she was the 11th sister to join the Oblates. As a teaching oblate, she instructed her students in math and English.

Marcia Chatelain, associate professor of history and African American studies and a member of the Georgetown University Working Group on Slavery, Memory, and Reconciliation, described Becraft as, “a devout Catholic and deeply committed to educating young girls of color in the nation’s capital. Though she experienced both anti-Catholic and anti-Black intimidation, she nevertheless responded to her calling to teach and to serve God.”

The Students for Human Dignity and Diversity in Action asks each of you to respond to God’s call.

After serving in the Army for a year, he soon discovered the practice of law was not for him. “I knew I could have made a great deal of money,” he said later, “but I could help only a few people. The future belongs to those who are educated, so I turned to education.”

The Sisters of the Blessed Sacrament who ran the only African American Catholic University in the U.S., hand chose Dr. Francis to return to Xavier University. He served as the Dean of Men in 1957, moving into three higher-level positions prior to becoming the first lay, male, and African American president in 1968.

Dr. Francis put his mark on the campus, adding many new buildings to the original campus totaling 51 million dollars while tripling and diversifying enrollment and expanding its curriculum. He received 35 honorary degrees and the Presidential Medal of Freedom from George W. Bush. His tenure of 47 years is one of the longest of any college president in our country. Recently the city of New Orleans renamed a street that borders Xavier University – Norman C. Francis Parkway.

In honor of Dr. Francis, the Students for Human Dignity & Diversity in Action asks each of you to use your education to become great leaders.

Sixteen-year-old writer and activist Marley Dias was born in Philadelphia and raised in New Jersey. Marley created and launched #1000BlackGirlBooks drive in November 2015. The goal is to get diverse books into schools. Marley’s own desire to read books at school which featured Black female protagonists as the main character fuels her organization’s success.

Marley has collected over 12,000 books to date. They have been delivered to Black girls here in the United States and in Jamaica. Due to the story of her work going viral, Marley has spoken at the White House’s United State of Women, The Forbes Women’s Summit, United Nation’s Girl Up, and she was interviewed on CBS This Morning and many others.

In the spring of 2018, Marley Dias Gets It Done: And So Can You! was published and released. The book shares the difference between activism and charity, diversity, how to stay organized, volunteerism, entrepreneurship, inclusion, and inspires you to pursue your passions.

The Students for Human Dignity and Diversity in Action asks each of you to use your concerns to become a catalyst for social change just as Marley Dias has!

After receiving a Bachelor of Arts in Sociology and a Master of Pastoral Studies from Loyola University in New Orleans, Dr. Augustine received his certification in Youth Ministry from Xavier University of Louisiana’s Institute for Black Catholic Studies. He then earned his Doctor of Ministry from the Graduate Theological Foundation.

Born and raised in New Orleans where he tirelessly helped to rebuild Treme, the oldest Black neighborhood in the country, Dr. Augustine is Executive Director of the Office of Cultural Diversity and Outreach for the Archdiocese of New Orleans. Previously he served in campus ministry at St. John’s University in Queens, New York.

Dr. Augustine has spent years feeding the homeless, working in prison ministry, serving youth, and empowering those who may be seen as those on the periphery. In an interview for the Black Catholic Voices series by Mark Zimmerman (the Catholic Standard’s editor), Dr. Augustine stated:

“…despite what may be in front of us, hope also comes from faith. What does the Bible say? Faith is the substance of things not seen. (Hebrews 11:1) So, we may not see the outcome right now, but as people of faith we know that the world will be better. But it’s up to us not to sit on our laurels and wait, but for us to take action. And as I said before, don’t just do the easy thing, but do the right thing.”

The Students for Human Dignity and Diversity in Action asks each of you to live your life as Dr. Augustine does – put your faith into action.